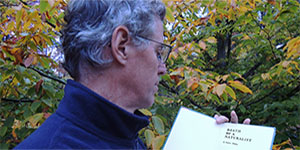 It has been just over three years since Seamus Heaney died. Considered one of the greatest Irish poets since Yeats, Heaney was awarded a Nobel laureate in literature in 1995 for his “works of lyrical beauty and ethical depth, which exalt everyday miracles and the living past.” For some reason, I cut out his obituary from the New York Times, folded it, and placed it on the corner of my desk where it has sat, yellowing and brittle, ever since. Last week I finally climbed up to the fourth-floor stacks in Hubbard Library to check out a volume of his verse. It was his poem “Death of a Naturalist” that I particularly wanted to read.

Do you remember what it felt like as a child to wade barefoot in a pond, warm mud oozing up between your toes, gassy organic odors released from the depths, the buzzing of summer flies? Heaney’s poems—”Digging,” “The Barn,” “Blackberry-Picking”—will bring you back there. They speak of the sogginess and chill of Ireland, of hard country labor and the sea, of soil and peat. In their imagery of the land and their remembrance of a simpler time, they feel grounded.

“Death of a Naturalist” starts with a celebration of the fecundity of life bursting from a rural “flax dam,” a small pond used for soaking flax stems to soften them for spinning into yarn. “Bubbles gargled delicately, bluebottles wove a strong gauze of sound around the smell… But best of all was the warm thick slobber of frogspawn that grew like clotted water in the shade of the banks.”

Then Heaney’s boyhood fascination with the innocence of nature takes a dark turn: “gross-bellied frogs were cocked on sods; their loose necks pulsed like sails. Some hopped: The slap and plop were obscene threats. Some sat poised like mud grenades, their blunt heads farting. I sickened, turned and ran. The great slime kings were gathered there for vengeance and I knew that if I dipped my hand the spawn would clutch it.”

That night I could not get the sound and richness of Heaney’s words out of my mind. Some of his words even reappeared as characters in a dream: physical, coupled in motion, and slightly menacing, like frogs.