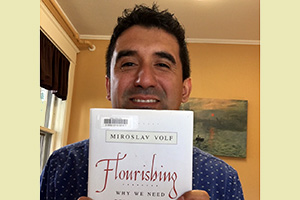 Since we’re right in the middle of the Multifaith Fellowship, I’ve been reading a lot of books and articles about engaging faith/religion/tradition with society and history. One of my favorites so far is by Miroslav Volf,  Flourishing: Why We Need Religion in a Globalized World.  Flourishing is the work of professor Volf’s seminar, “Faith & Globalization” with Prime Minister Tony Blair at Yale University. Volf describes how religion and globalization interact with each other and have shaped our current world. Probably more interesting is his discussion about how religion and globalization have competing visions of what it means to live well and be human. He argues that we need religion’s moral voice to help us craft a vision for human flourishing that is grounded on universal values, and we need globalization as a force to help free world religions from troubling alliances with communal identity and politics. Ultimately Professor Volf argues that religions need to be critical of themselves and keep turning back to these larger ideas of human flourishing and human prosperity, and that by doing so they can be shapers of globalization as a force for the common good. It is exactly this last argument that is one of the reasons why I find the study of religion important, because it can be such a powerful force for universal good and hope for humanity.