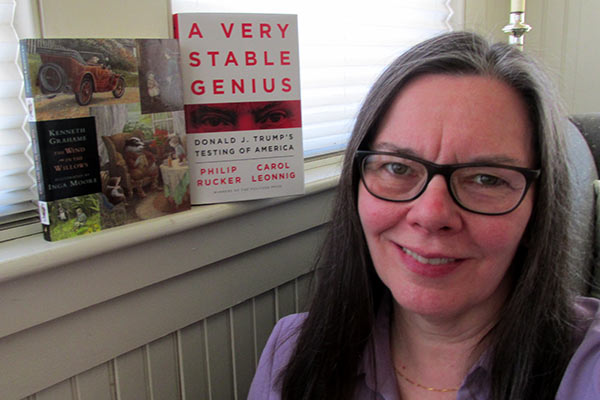 (Professor Slowiaczek also recommends The Wind in the Willows, see below.)

Philip Rucker and Carol Leonnig’s book  A Very Stable Genius is about the first three years of the Trump presidency.  The authors are journalists at the Washington Post and the style of the book is in keeping with their profession.  Rucker and Leonig take an objective approach to reporting about the current administration starting from the week after the Trump inauguration through the presentation of the Mueller report.  Many (but not all) of the events reported in the book would be familiar to any diligent reader of good newspapers.  But I was interested in seeing a compilation of these incidents and the book is a continuous progression of the major proceedings in the current White House. While the impression of the Trump presidency is one of chaos, Rucker and Leonnig are able to identify underlying patterns of behavior by the president and his associates that reveal an overarching focus on self-interest, loyalty and power.  As a psychologist I was fascinated to read about the president’s unpredictable actions and volatile reactions. This presidency is atypical on many levels but it was also unsettling to be reminded about the dysfunction not just in the White House but in congress. The realization of how damaged our government has become as highlighted in this book is terrifying.  Hope lies in the knowledge that in a democracy the people can bring about change in the next election cycle!

The gravity of the Rucker and Leonig book in combination with the current Covid-19 crisis affecting the United States and the world made me hesitant to use A Very Stable Genius as my Bowdoin Reads submission.  So to mitigate the harsh effect of this book during a stressful time I also submit Kenneth Grahame’s The Wind in the Willows.  The illustrations by Inga Moore in the Candlewick Illustrated Classics edition are especially charming and I find that reading this book is particularly soothing during this frightening period in our lives.  The Wind in the Willows tells of the adventures of Mole and his friends Water Rat, Badger and Mr.Toad.  On any day when you are feeling anxious or worried, I guarantee that escaping into the environs of these adorable creatures for just a short while will soothe your soul.  In a recent opinion piece in the New York Times, Ann Patchett (https://www.nytimes.com/2020/03/30/books/review/kate-dicamillo-ann-patchett.html) wrote that reading children’s books can be calming.  As an adult her error in not picking up such books could be rectified by realizing she could still step “through a magic portal.”  All she had to do to pass through “was believe that she wasn’t too big to fit.”  The portal into The Wind in the Willows is particularly wide.